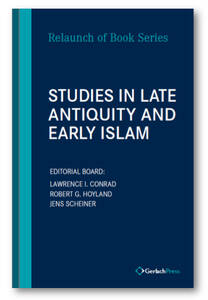 Gerlach Press (Berlin and London) has relaunched the renowned book series “Studies in Late Antiquity and Early Islam“ (SLAEI), formerly published by Darwin Press, Princeton, and will in future publish several volumes per year. The first 15 volumes of the backlist were reissued in May 2021. “SLAEI“ is edited by Jens Scheiner (University of Göttingen), Lawrence Conrad (Emeritus, University of Hamburg) and Robert G. Hoyland (New York University). The study of Early Islam in the context of Late Antiquity has developed into an ...
more »

This volume focuses on the problems researchers face when using (Byzantine) Greek, Syriac and Arabic sources together for the reconstruction of Near Eastern history from 400–c. 800. Contributions to the volume set the stage for a critical re-reading and revisionist interpretations of selected sources in the various cultural and literary traditions. The volume thus brings together neighbouring disciplines in ways that shed new light on this vitally important time in history. 1. Michael Whitby, Greek Historical Writing after ...
more »

Volume 2: Land Use and Settlement Patterns

A comparative analysis of Byzantine, Sasanian and Muslim armies and their impact on state resources. Contributions discuss the organization and financing of the army in the late Roman state, the transformations and continuities of the late Sasanid state and with authority and armies in the early Muslim state. Thus, the volume brings together perspectives from neighbouring fields, presents military issues in an intercultural manner and assembles important pieces of knowledge in a comprehensive manner. 1. Jean-Michel Carrié, L...
more »

A collection of critical analyses of the structure, historical development, and composition of the elite strata of late Roman, Byzantine, and early Islamic societies in the eastern Mediterranean basin. Culture change, economic foundations, political roles and function, social composition, and background and origins of old and new elites are the focus of the contributions by scholars who deal with the fate of the later Roman elite and its successors. 1. Hugh Kennedy, Elite lncomes in the Early lslamic State 2. William Lancast...
more »

Volume 1: Problems in the Literary Source Material focuses on the problems researchers face when using (Byzantine) Greek, Syriac and Arabic sources together for the reconstruction of Near Eastern history from 400–ca. 800. Volume 2: Land Use and Settlement Patterns revisits archaeological evidence from Syria, Palestine, the Arabian Peninsula, Iraq and Egypt describing a variety of land-use patterns and the development of a particular type of settlement across the Near East. Volume 3: States, Resources and Armies focuses on a ...
more »

The Christian Communities of Palestine from Byzantine to Islamic Rule.

An Historical and Archaeological Study

An assessment of the nature and social continuity of Christian communities in Palestine from 602–813. By synthesizing literary and archeological evidence, it provides a detailed discussion of disparate historical and archeological data. In the first part, the Sasanian, Byzantine and early Muslim invasions of southern Syria and the changing of government policies towards Christians are discussed. Topical studies about church use, conversion and iconoclasm, are also included. . The second part offers a useful alphabetical ...
more »

The Beginnings of Islamic Historical Writing

How and why did Muslims first come to write their own history? The author argues in this work that the Islamic historical tradition arose not out of idle curiosity, or through imitation of antique models, but as a response to a variety of challenges facing the Islamic community during its first several centuries. In the first part, the author presents an overview of four approaches that have characterized scholarship on the literary sources, including the source-critical and the skeptical approaches, then it discusses histo...
more »

with an Introduction by G. R. Hawting

Collection of all of Martin Hinds’ (1941–1988) full-length articles which appeared in journals as well as one of his articles for the Encyclopaedia of Islam, 2nd Edition. Most of the articles have to do with the early period of Islamic history, while two others deal with the early Abb sid caliphate. The volume is especially important in light of the fact that all of the articles were revised by the editors based on Hinds’ own corrected copies: 1. Kufan Political Alignments and Their Background in the Mid-Seventh Century A.D...
more »

The North African Response to the Arab Conquest

This book is a study of the early history of the lbadiyya in North Africa, a "moderate" movement among the Kharijis which from its base in Basra gradually spread among the Berbers of the Maghrib in the 750s. The Berbers found in this new religious allegiance an attractive ideology with which to rebel against the central caliphate. An Ibadi imamate, headed by the Rustamid dynasty, was founded in Tahart in 160 or 162/777 or 779 and lasted until 296/909, when it fell to the Fatimids. The book is divided into seven ch...
more »

Arabs and Others In Early Islam

This work investigates available early Arabic hadith and exegetical literature in order to determine the great complexity of how Arabs, Muslims and Arab-Muslims viewed themselves and members of other communities. In particular, it focuses on the relation between definitions of “Arabness” and “otherness” with Islamic ascriptions of believers and nonbelievers and endeavors to trace the changing of these views over time. Moreover, this is an in-depth analysis of a series of ad ths and isn ds that discusses when, where, why, an...
more »

Including an Annotated TranslatIon

A complete facsimile edition of the previously unedited Samaritan sequel to the Kitab al-Ta‘rikh by Abū l-Fatḥ al-Sāmirī al-Dinfī (d. ca. 1355). The edition of this chronicle photographically reproduces Paris BN Ms. Samaritain 10 (pp. 203–264), which, written in Middle Arabic, seems easily readable but poses a plethora of editorial problems. The editor entitled the work a Continuatio, and translated it into English with full editorial and explanatory annotation. The work describes the local history of the Samaritan people i...
more »

The Earliest Biographies of the Prophet and Their Authors

Josef Horovitz (1874-1931) wrote this classic monograph a century ago in two parts in German. The editor added footnotes, corrections and the preface, and it is now a book in its own right. The translation was prepared by Marmaduke Pickthall (d. 1936). Lawrence I. Conrad, who re-edited the articles also presents a slightly corrected textual version, expanding and updating the notes and bibliography and adding a new introduction dealing with Horovitz’s and other orientalists’ work on early Islam in the early 20th century. H...
more »

Ibn Asakir’s massive Tarikh madinat Dimashq (TMD) is a veritable gold mine of information for our understanding of the first five and one-half centuries of Islamic history. This book offers important insights on the mechanics of Arabic historiography, in particular on biographical sources from the Middle period. Moreover, two contributions show that Ibn ‘Asakir pursued a political and sectarian agenda within his TMD. 1. James E. Lindsay, Ibn ‘Asakir, His Ta‘rikh madinat Dimashq and its Usefulness for Understanding Early Isl...
more »

A detailed study on the nature of Muslim apocalyptic material in Islam, both Sunni and Shi‘i . Taking a transcultural perspective by also discussing Christian and Jewish apocalyptic traditions, it offers in eight studies and three appendices a typology of apocalypses and many new insights into the matter. For instance, historical apocalypses as well as apocalyptic figures, like the Dajjal, the Sufyani and the Mahdi are discussed. Moreover, apocalyptic hadith literature, in particular Nu‘aym b. Hammadi’s (d. 844) Kitab al-Fi...
more »

This work focuses on the intellectual and educational history of Baghdad in the early ‘Abbasid and Buyid periods (8th–10th centuries). It covers a wide range of disciplines taught in the metropolis before the institutionalization of the madrasa system. Among these fields of knowledge are Arabic poetry and literature, the transmission of prophetic reports, Arabic historiography and astronomical-astrological teaching. Christian learning in the city is highlighted by two contributions, while two more papers focus on Jewish pra...
more »