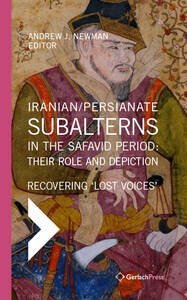 Islamic Theological Discourses and the Legacy of Kalam. Gestation, Movements and Controversies

With a concern for context and history, this major reference work presents key academic contributions devoted to the study of early, classical and pre-modern Islamic theological thought. The aim is to provide a balanced survey of the research discourses which have shaped study of the rich legacy of Islamic theology and Kalam. Divided into three volumes and comprising 39 articles, the collection includes an introduction which provides not only an assessment of key discussions and debates in the study of Islamic theology, bu...
more »

Occidentalism, Conspiracy and Taboo. Collected Essays on Islam and Politics

Sadik J. Al-Azm was one of the foremost Arab public intellectuals, who offered innovative, often controversial challenges to conventional narratives on Islam and the West, Secularism, Orientalism, and the Israel-Palestine issue. This fourth collection of his essays includes: - Syria in Revolt (2014) - Experience or “Regime of Truth”? About Translation, Arabic and the Postmodern (2014) - Orientalism of the Worst Kind (2015) - The Shari‘a from a Secular Perspective (2015) - Crossing Borders: Orientalism, lslamism and Postmoder...
more »

The Struggle for the Meaning of Islam. Collected Essays on Islam and Politics.

Sadik Jalal Al-Azm was an internationally respected scholar and political commentator who offered innovative, often controversial challenges to conventional narratives on issues surrounding Islam and the West, secularism, Orientalism, and the Israel-Palestine issue. He was recognised as a principled defender of human rights and has been the main ethical reference for the Syrian revolution. Al-Azm was educated at the American University Beirut, and at Yale in modern European philosophy and has taught at Damascus, Harvard, Pri...
more »

Forty Theses for an Islamic Ethics in the 21st Century

Abdel-Hakim Ourghi’s Reform of Islam is an open indictment of prevailing conservative Islam which insists on the absolute subjugation of the body and mind of all Muslims. The author seeks a humanist understanding of Islam and aims to interpret Islam in today’s terms. He argues against the historical alienation and transfiguration that still shape the collective consciousness of Muslims in the 21st century. Using critical analysis and logic, the author aims to reveal the true core of Islam. Ourghi’s 40 Theses include: - The ...
more »

Islamist Occidentalism: Sayyid Qutb and the Western Other

Sayyid Qutb (1906-1966) was the most important radical Islamist ideologue in modern times. This groundbreaking new study analyses Qutb’s thinking from his early years in Cairo to the radical Islamist stance he adopted towards the end of his life. „Essentialist views are not the preserve of Orientalists in the Saidian sense. They are the bottom line of all brands of contempt for or hatred of the Other, when the latter is a collective identity, one side’s essentialist rejection prompting the other side’s counter-rejection. The...
more »

One of the most misunderstood aspects of Islamic legal practice and thought is the role and position of fatwas or legal opinions. This three-volume reference work offers a comprehensive overview of and detailed insights into - the concept of the fatwa as a vehicle of legal opinion-making in Islam - its historical role in different parts of the Muslim world - and contemporary debates reflecting both the fatwa's enduring relevance and its ongoing contestation among Muslims today....
more »

European Muslims and their Foreign Policy Interests: Identities and Loyalties

In a global context marked by terrorist threats, Muslim communities in the West have come under increasing scrutiny. Sensitive questions on identity arise with regard to their foreign policy interests and their loyalties. Topics covered include: - Relations between European Muslims and international issues - Political opportunity structures - Organization and institutionalization of Islam - Diaspora and transnational dimensions - The securitization of Islam - Foreign policy and loyalty This book investigates the foreign pol...
more »

Islam and Humanity: Consequences of a Contemporary Reading

„EXPLAIN THE QUR’AN BY THE QUR’AN“ Shahrour’s reading of the Qur’an is “modern” in that he directly engages the reader. He argues that we must act as if “the Prophet just died and informed us of this book” and interpret his message anew. The reader must actively interpret the meaning of the Qur’an. The Prophet Muhammad conveyed the last of God’s revelations; now, writes Shahrour, humankind is on its own to perfect itself and adapt to modern conditions. His first book as an Islamic thinker "Al-Islam wa-l-Kitab" was ...
more »

Following the great expeditions of the 18th and 19th century, travel activity in general increased from the end of the 18th century onwards. In addition to European destinations, the Orient and above all Egypt now became the goal of this movement embracing travel and exoticism. This work centers on the question of the received patterns of thought and argumentation that were applied consciously or unconsciously by those travelers. By way of example, the reports of the Austrian scholar and scientist Joseph (Ritter von) Russegg...
more »

The Caliphate and Islamic Statehood: Formation, Fragmentation and Modern Interpretations

Although the Caliphate was formally abolished ninety years ago, it had already ceased to exist as a unitary and effectively administered political institution many centuries earlier. The ever widening gap between political ideal and historical reality is also reflected in the varying conceptualizations and theories of the Caliphate developed by Islamic religious scholars and Muslim intellectuals past and present. However, recent events in the Islamic world show that the idea of a Caliphate still appeals to Muslims of varying...
more »

On Fundamentalisms: Collected Essays on Islam and Politics

Volume 1, with a Foreword by Stefan Wild

Sadik Al-Azm was one of today's foremost Arab public intellectuals, who offered innovative, often controversial challenges to conventional narratives on Islam and the West, secularism, Orientalism, and the Israel-Palestine issue. On Fundamentalisms includes essays on: - Islamic Fundamentalism Reconsidered - Islam and the Science-Religion Debates in Modern Times - The Struggle for the Meaning of Islam - What is Islamism? - The Takfir Syllogism...
more »

Sadik Al-Azm was one of today's foremost Arab public intellectuals, who offered innovative, often controversial challenges to conventional narratives on Islam and the West, secularism, Orientalism, and the Israel-Palestine issue. Islam – Submission and Disobedience includes essays on: - The Importance of Being Earnest About Salman Rushdie - Is the Fatwa a Fatwa? - The Tragedy of Satan - Satanic Verses Post Festum: The Global, the Local, the Literary - Universalizing from Particulars...
more »

with a new introduction by the author

Sadik al-Azm's Critique of Religious Thought set off one of the the great Arab intellectual uproars of the twentieth century, leading to the author's imprisonment and trial for mocking religion and inciting sectarian conflict. As in his earlier Self-Criticism after the Defeat, Al-Azm takes on the taboos of the age and their sponsors: the religious elites. In this book he attempts to awaken the Arab mind from its dogmatic slumber, leading it out of the Middle Ages and into a modern world characterized by science and rationali...
more »

The Arabs and Islam in Late Antiquity:

A Critique of Approaches to Arabic Sources

This work provides a critique of Arabic textual sources for the history of the Arabs in late antique times, during the centuries immediately preceding Muhammad and up to and including the Umayyad period. Aziz Al-Azmeh considers the value and relevance of a range of literary sources, including orality and literacy, ancient Arabic poetry, the corpus of Arab heroic lore (ayyam), the early narrative, and the Qur’an. The work includes a very extensive bibliography of the works cited. This is the first book in the Gerlach Press se...
more »

Secularism, Fundamentalism, and the Struggle for the Meaning of Islam.

Sadik Jalal al-Azm was an internationally respected scholar and political commentator who has offered innovative, often controversial challenges to conventional narratives on issues surrounding Islam and the West, secularism, Orientalism, and the Israel-Palestine issue. He is recognised as a principled defender of human rights and has been the main ethical reference for the Syrian revolution. Professor al-Azm was educated at the American University Beirut, and at Yale in modern European philosophy and has taught at Damascus...
more »