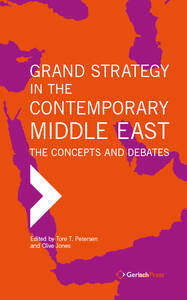 Without Glory but Without Disaster

Britain’s hasty departure from Aden and South Arabia after 128 years has often been presented as a humiliation at best and a disaster at worst. London’s hopes of handing power and sovereignty over to a friendly federal regime collapsed in the face of a nationalist uprising backed that enjoyed the support of Egypt. Five decades after the final British troops left Aden, academic experts and former British officials directly involved in the events that unfolded critically reflect on British withdrawal from South Arabia, the po...
more »

European Muslims and their Foreign Policy Interests: Identities and Loyalties

In a global context marked by terrorist threats, Muslim communities in the West have come under increasing scrutiny. Sensitive questions on identity arise with regard to their foreign policy interests and their loyalties. Topics covered include: - Relations between European Muslims and international issues - Political opportunity structures - Organization and institutionalization of Islam - Diaspora and transnational dimensions - The securitization of Islam - Foreign policy and loyalty This book investigates the foreign pol...
more »

The bitter confrontation between Saudi Arabia and Iran is not only stoking conflicts in Syria, Iraq and Yemen, but now threatens the stability, security and well-being of the whole Gulf region. All the major global powers have significant interests in this area, and the pursuit of these interests adds further layers of division and conflict. This book goes to the heart of this issue, examining the critical modalities whereby the "Gulf Cold War" can be brought to an end. What is needed, the contributors argue, is th...
more »

The Arab States of the Gulf and BRICS:

How the Gulf Cooperation Council (GCC) relates to BRICS (Brazil, Russia, India, China, and South Africa) is, in the light of the growing strength and importance of this organisation and the countries which comprise it, of critical importance. The issue is not simply how the GCC countries handle their relations with the individual BRICS countries, but more importantly how they relate to an alternative structure of coordination and perhaps power in the global order. Their established links and alliances may no longer be enough...
more »

The Arms Trade, Military Services and the Security Market in the Gulf States: Trends and Implications

The Gulf is in the first rank of potential global flashpoints. It is the largest market for weapons imports in the world, and is considered to be a vital interest of all the great powers. Iran is viewed as an expansionist threat by the Arab states of the Gulf, who have built considerable militaries in a historically short timeframe. Security in the Gulf, however, is a complicated matter. The Arab states of the Gulf have pursued different defense policies as well as different ways of building up their forces. In some instance...
more »

Russia and the Syrian Conflict:

This book is the first to offer a comprehensive survey of Moscow’s foreign policy interests in Syria. The author considers the Kremlin’s diplomacy on Syria within the broader system of Russian foreign policy in the Middle East; he analyses the influence of Russian domestic dimensions on Moscow’s approaches to the subject; and he considers how Moscow’s priorities in Syria have evolved during the last five years and what factors influenced this evolution. Key factors considered include: - Russian presence in the Middle East be...
more »

The GCC in the Global Economy

Changing geopolitical realities have seen the Gulf region turning to Asia and Africa to build new economic links, while strengthening old ones. This proactive internationalism is visible not just in economics and energy, but also in politics and security where a host of new agreements has been developed. This work provides an overview of the ways in which the GCC states now need to move ahead with reforms that will reflect issues such as raised expectations from a period of high revenues and the region's demographics. The wo...
more »

The Gulf countries have adopted a unique combination of policies to encourage diversification with largely positive results, while there are significant distinctions between the individual cases. This work evaluates various examples to show the extent to which the Gulf economies have diversifed to date, and how results can be measured, taking into consideration factors such as composition of GDP or exports; government services; and the categorization of industrial activities downstream of resources extraction (oil refining, ...
more »

Bond markets in the GCC countries are underdeveloped, and the capital mix is heavily skewed towards banks, while ambitious development plans in fields like petrochemicals and infrastructure, as well as a rapidly growing population, create an increased need for finance. This study outlines the structure of various segments of GCC financial markets and points to regulatory challenges and future developments, ranging from capital market structures to the planned GCC Monetary Union, Islamic banking, and sovereign wealth funds. T...
more »

National Employment, Migration and Education in the GCC

This volume provides a cross-cutting analysis of the policy challenges related to GCC labor markets. It analyzes the different dimensions of segmentation of these markets, factors of change influencing labor supply such as trends in education and demography, as well as the impact of potential future reforms in areas such as immigration policy, labor sponsorship, taxation and minimum wages. The work therefore provides an overview of what arguably will be the core socio-economic challenge for the GCC in the coming years....
more »

The four volumes in this major research collection address the key economic issues which affect the future development and diversification of the member states of the Gulf Cooperation Council (GCC), namely Saudi Arabia, Kuwait, Bahrain, Qatar, UAE and Oman. Specifically, this recent research covers Economic Diversification, Development of Global Partnerships, Labor Markets and Migration, and Financial Markets as Global Players The work brings together state-of-the-art analysis by some 40 international scholars who participat...
more »